Lesson 3: The Layers of the Earth

Lesson 3: The Layers of the Earth

[dropcap type=”square”]3[/dropcap] The Layers of the Earth 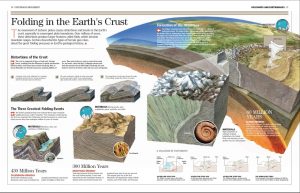 [toggle title=”The Crust”]The crust is the part of the Earth that we stand on everyday. The crust is the only part of the Earth that we can touch with our hands and see with our eyes everyday. Remember the sand, clay, and humus that we had in class? Those different kinds of soils are part of the crust! The crust is not very hot since it is on top. The temperature of the crust is different all over the world.[/toggle][toggle title=”The Mantle”]The mantle is under the crust. The mantle is made up of really hot rock that is melted, called molten lava. The red flowing lava that comes out of a volcano is part of the mantle. The mantle is the largest layer of the Earth. The mantle has a temperature from 1600 degrees Fahreheit to 4000 degrees Fahrenheit! That’s very hot![/toggle][toggle title=”The Outer Core”]The outer core is so hot that the metal elements are molten! Molten means that something is liquid from melting. The outer core is ever hotter than the mantle!! The outer core has temperatures starting from 4000 degrees Fahrenheit to 9000 degrees Fahrenheit![/toggle][toggle title=”The Inner Core”]All the other layers press down on the inner core. The pressure from all the other layers make the inner core solid even though this layer is the hottest layer. The temperature of the inner core reaches up to 9000 degrees Fahrenheit![/toggle]
Review the following for Monday’s class (PDF Example):
[gview file=”https://mma.wan-ifra.org/wp-content/uploads/2013/05/earthlayers-article_WMWBZ.pdf” save=”1″]